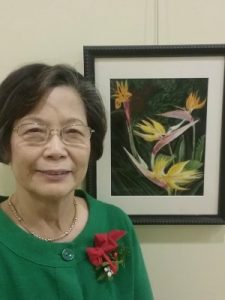 Esther Suh, recipient of the 2017 Person of the Year, in front of one of her paintings.

Esther Suh, one of 160+ PEER Servants volunteers, is the recipient of PEER Servants’ 2017 Person of the Year. The Award recognizes those who God used in extraordinary ways in the year to extend His kingdom to many. Esther is a prayer warrior and a fantastic encourager. She hosted various PEER Servants events with her gift of hospitality. But it was, in her own words, Esther’s willingness to “get out of the boat” and embrace her dependence on God that enabled her to be used by Him to raise tens of thousands of dollars for the materially poor. She used her gift of painting and sold her works of art and then donated the proceeds to PEER Servants. She brought PEER Servants brochures with her and shared them with interested friends and family who responded by giving generously. In short, she did what Jesus told all of us to do – go and tell what we have seen and heard. We celebrate Esther Suh and her willingness to be used by God in an extraordinary way in 2017.