In the spirit of Lydia, PEER Servants sponsors the Annual Lydia Award. It recognizes those micro-entrepreneurs having significant impact in their families and communities. Read the stories of this year’s three finalists below.

Join us in thanking God for the transformation in the lives of these hardworking micro-entrepreneurs and, through them, the lives of many others. 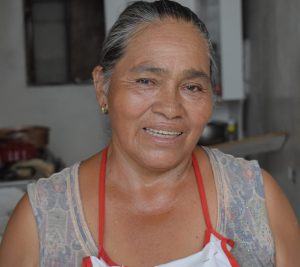 In order to feed her family, Gloria Martinez used to travel to the countryside to sell recycled items from the massive Guatemala City garbage dump. The long walks carrying heavy bags slowly took a toll on her health until she reached the point where one day she collapsed and she was no longer able to continue with this work. Gloria was the only breadwinner in her family; how would she be able to make a living?

Gloria felt God encouraging her to not give up. She felt His leading to join a bakery class which the Municipality of Guatemala offered, and learned to make one type of cake. Then, in 2019, Gloria heard about the bakery class that Potter’s House, PEER Servants’ partner in Guatemala, was starting. She joined this class and learned to bake a wider variety of products, including cupcakes, empanadas, doughnuts and a real favorite, Bundt cakes! She and her adult daughter began to sell baked goods in open air markets. Using training from Potter’s House, they gave free samples to attract clients, offered home delivery, and handed out promotional business cards. Gloria also started taking out microloans from Potter’s House (the first one for just $135 and her now sixth loan for over $1,500), using the capital to purchase baking equipment and smaller ovens to meet orders, until she could afford an industrial oven.

Now Gloria’s business has grown significantly (her profits have more than doubled and her assets increased by a factor of eight!); she now has more than enough to supply the family’s needs. Gloria has become a role model for other loan clients in the Potter’s House program, offering advice, encouragement, and inspiration to those just starting their own business.

Gloria’s dream is to open her own storefront bakery, but not just for her own benefit. Gloria remembers how hard it was for her to feed her children, and she dreams about being able to provide bread and other baked goods at a discounted price to other families in need. She also wants to create jobs for women and enable them to support their families. 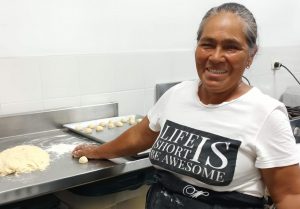 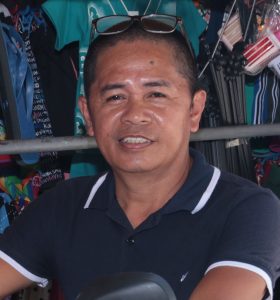 When people’s lives are transformed, their priorities change. This is what happened to Eddie Uyboblante. His priority used to be drinking and smoking with his friends. As a result, his family life suffered, as did his business. Eddie was forced to borrow money for his business from unreliable sources.

One day a friend recommended that he join the microfinance cooperative arm of CCT, PEER Servants’ partner in the Philippines. Eddie began using low interest loans (his initial loan was $100) and training from CCT to make improvements to his business of selling goods from a rolling cart, changing his focus to “Ready-to-Wear” clothing, or “RTW” for short. He even decided to honor his wife, Marelou, when he named the business “Malu RTW”. He was able to access larger loans (now on his 11th loan of over $5,000) and his business prospered during the pandemic because he was able to go to his customers with his rolling carts when they were unable to shop elsewhere. Soon one cart became seven. Eddie knew the pandemic would eventually pass and he was able to purchase a permanent retail space in a highly visible part of his town.

But it wasn’t just Eddie’s business that was transformed. He was curious about CCT’s emphasis not only on business but also on growing spiritually and he really wanted to learn more about God, so he joined a fellowship group. In Eddie’s words: “Being part of CCT helped me and my family mold and deepen our relationship with God.” Soon he was starting a fellowship group in his own home, inviting family, friends, and neighbors to join. Instead of drinking and smoking, Eddie began investing his time in his children.

Now Eddie’s children have completed their education and have good jobs of their own. Eddie’s small house fellowship group has 48 regular attenders. Not only has Eddie’s life and priorities changed for the better, but so have the lives of many others. In Eddie’s words: “God is a good Father to me. He even sacrificed His Son just so that I can be saved. He is so good to me.” 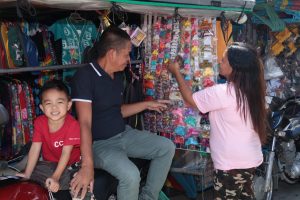 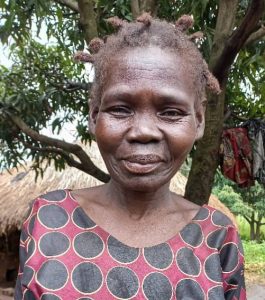 Like most single moms of young children, Monica Eliru knew she had to find a way to provide. Farming is what she knew, so in 2011 she invested the very little she had, less than $10, and bought very basic farm tools. Her brother helped her with a small amount of startup capital. Monica struggled for the next seven years, but she persevered. In 2018 she took the meager $50 she had and hired men to help with digging and planting. That’s also the year that she became a client of CAFECC, PEER Servants’ partner in Uganda, and everything began to change. Monica says, “I learned of CAFECC as a Christian microfinance program and the loan officer guided me through the process and gave me inspiration to apply for my first loan.”

With faithful repayment of that first small loan, more training and encouragement from CAFECC, and larger and larger loans, the business finally took off. She used her second loan for ground nut (peanut) farming, her third loan for banana farming, her fourth loan for cassava farming, and subsequent loans for beans and maize (corn). Monica now has a large, diverse farm and is also rearing goats, cows and chickens.

CAFECC has helped Monica learn to save, to keep good records, and make good decisions. She now employs six full time workers and also hires two to four people for part time work. She has grown from only selling in her small community to selling in other parts of the region, and people rave about the quality of her farm products.

Monica was able to educate her two children and also two orphans. She finds joy in helping the elderly and others in need in her church. She generously shares products like cassava, beans, maize, bananas, salt and sugar with those in need. She has trained a number of women who were in dire circumstances similar to hers, and they are now farming to support their own families. Monica sees her farm as much more than a business; it is her ministry to extend more of the kingdom “on earth as it is in heaven.” 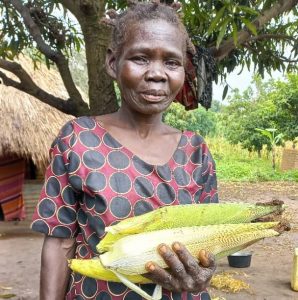